Lately, there's some exciting stuff happening with Lanarts, and it'd be a shame not to share -- especially because I don't know how long it will take to stabilize all the new features! 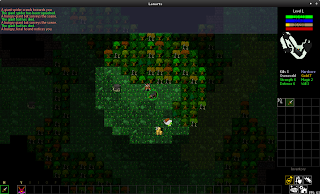 This happened much sooner than I thought! For those of you following, Release 12 introduced an overworld -- however, it was not randomly generated.

I really didn't know how I'd approach the overworld -- connectivity is tricky with non-grid layouts. The approach taken was fairly simple. The algorithm is basically just a bunch of random polygons, and lines connect nearby polygons. I used libxmi to draw the polygons efficiently, and baked it into my map generation library. From there, Lua code controls the map generation, and it it is quite well-performing, even for large maps. 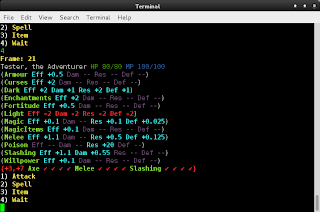 From a gameplay perspective, this is huge (and criminally overdue). This replaces the previous simplistic stat system (Melee/magic damage types, and resistance/effectiveness/damage/defence for each). Now possible are elemental damage types, bonuses against specific monsters, easily-definable custom status-types, equipment that can grant virtually any ability, etc.

I could probably write a whole blog about the nuances of the stat system, but essentially it was rewritten in clean Lua with many interesting possibilities. The stat system comprises of base stats, and components of these base stats, eg the inventory, result in bonuses to the derived stats. This way eg you can have a spell that is granted only when wielding an item, since it can be added to the derived copy of the stats. This derived copy is computed whenever needed.

Roadmap:Finally, the goals I laid out for Lanarts Release 1.0 have started to take shape. The two issues being tackled by this release plagued me for a long time, and I'm happy to have found elegant solutions to both of them (thanks to the expressiveness of Lua!)

Another, relatively unseen, issue that I have gone a long way to fulfilling is the ad-hoc nature of the Lua API. Recently, a lot of effort has been taken to clean-up and modularize the Lua part of the code. The Lua API continues to become more lower-level and general to take full advantage of Lua's expressiveness.

While development for release 13 is well underway, there is still lots to do. Unfortunately, there is a lot of balancing work ahead with the new stat system, but I have some promising ideas for automating this task.

Please direct any bugs, comments, or inquiries either as a github issue, a comment on this blog, or through IRC or email: