So, I had told myself I'd get use to Linux prior to coming to Red Hat, but truthfully that wasn't much needed. You learn fast when you're thrown in, and its sink or swim.

So, Fedora 16 was my first Linux distribution. I liked it a lot. I liked GNOME 3 a lot. With Fedora 16's end-of-life approaching (today, in fact) it was time to jump ship. GNOME 3 was nice enough, but I decided to put some of the noise about it in perspective and try something else. 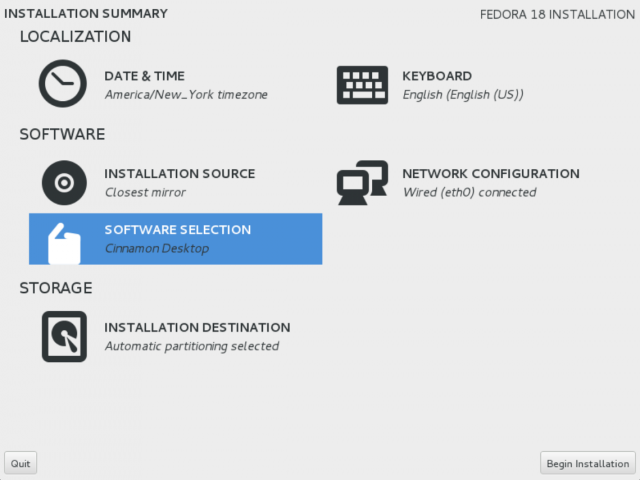 Noticeably worse - a bit sad because obviously a lot of work was put into it. The new layout shows you all your options at once, but I think stepping you through them was more user-friendly.  Partitioning was confusing but in the end, it all worked well. Once I figured out I had to click on my F16 install, and hit a 'minus sign', everything went smoothly.

This probably impressed me more than it should have, but everything looked really tight to me. The fedora boot loader has a graphical back-drop, the login screen looks really nice, as were the various GNOME3 visual improvements. All of it fit together really nicely. Of course, at the end of the day, I would happily turn off any of these things for a better workflow. It sure is nice when people ask 'Whats this Linux thing?', and you have something shiny to show them.

So once I tried to get some real work, I was unhappy to find a lot of small Eclipse issues. While F18 can only be blamed for bugs in Eclipse to a limited extent, it is one of those 'too big to fail' applications these days, so its worth mentioning. Without going into detail, these included issues with Java perspective not showing up after installing Eclipse Java Tools, and various graphical glitches using Eclipse C++ Tools. A more fundamental bug occurred when I tried to turn on desktop icons in GNOME 3.6 - instant crash, and crashing whenever I logged in.

Cinnamon!
The best thing about failing to get icons working on GNOME (admittedly I didn't try hard) was the decision to try out if they worked with Cinnamon. First off, I was very impressed with how well Cinnamon integrated with the whole Fedora user experience. Not only did a single yum command and a 'cinnamon --replace' have me trying it out in seconds flat, it was very simple to make my default desktop environment (toggle on log-in).

For someone like me that found GNOME 3's visually appealing, Cinnamon was perfect. Very soon I got rid of that 'hot corner' that GNOME 3 is so centered on, and set up some settings to my liking. Overall I find it more featureful, perhaps more Windows-like, but I'm not complaining.

Some things I do miss though is the nice way of dragging windows into workspaces with GNOME 3, and the 'application-centric' alt-tab that groups windows based on application.

Anyway, that's it for now. Overall I really like it, but then again I would have just been happy to get up to date packages again. YMMV.